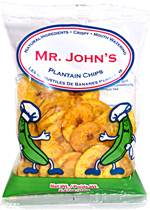 Taste test: We were excited to find this bag of chips, because it stood out for other plantain chips we've found in some notable ways. The first thing was that it was from Canada, which isn't known as a common source of plantain chips — they're often from the Caribbean. The other thing we really liked was the plantain mascot on the front, with its smiling face, bow tie, chef's hat and holding a towel in its arm. In truth, we didn't even realize it was supposed to be a plantain at first, as it looked more like a pickle.

Most of the chips were close to round, but they varied a bit, as there was a subtle cross-cut angle that varied a bit to create various oval shapes. They had a golden yellow color, with lots of browning in places, for a very nice appearance. We crunched in to find that they were cut fairly thick and had a minor crunch and middling crispness, with a rich plantain flavor that was just slightly sweet and just slightly salted. Quite flavorful, a good plantain chip from the North.