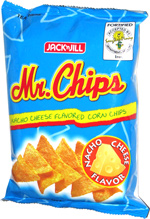 Taste test: As with the Pinoi Spaghetti flavor from Mr. Chips, we felt compelled to buy this bag simply because we really liked the Mr. Chips brand name. The description on the bag sounded fairly conventional: triangular nacho cheese tortilla chips. So we opened the bag to find that the chips were indeed triangular but were much smaller than Doritos, with a much different appearance. The surfaces were smoother than Doritos and looked a lot like Fritos, with a pale yellow color and occasional black spots. The chips were thinner than Fritos and seemed to have some cheese powder on the surfaces, though the powder was practically invisible, as it just about matched the pale color of the chips.

We crunched in to find a light crunch and a mildly tangy cheese flavor at first, with some heat in the aftertaste. Pretty good.

This snack was discovered by Jeremy at US Supermarket, Elmhurst, New York. Review published September 2013.