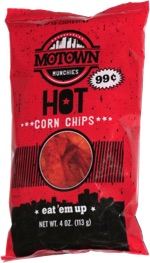 Taste test: These corn chips had Fritos-like shapes and a dark red-orange color on most of their surfaces, with occasional areas of yellow from the underlying corn chip showing through.

I crunched in to find a strong crunch and an initial taste that was just mildly hot but pretty tasty. The heat great as I ate more chips, then got noticeably hotter in the aftertaste, though it was still not quite run-for-a-beverage hot. All in all, these were pretty similar to Nicks Hot Sauce Corn Chips, which were also from Michigan.

Smell test: Could feel the vinegary sting of the hot sauce.

From the package: “eat 'em up” ... “Snack Facts: Detroit is a city of grit, determination and innovation — and there's more to it than meets the eye. Founded in 1701, Detroit is the oldest city west of the original thirteen colonies...” ... “Get ready for the greatest comeback in history and join us” ... Oddly, this bag had no contact information for the manufacturer.

This snack was discovered by Jeremy at Mike's Fresh Market, Detroit. Review published .