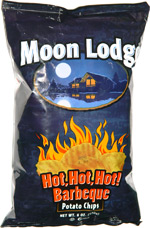 Taste test: Even though we've reviewed more than 1400 kinds of potato chips, this bag was a much-anticipated snack for our tasters. This was not strictly because of anything about the chips themselves (though we had heard good things), but more because of their distribution channel. Apparently they're the potato chip of choice at certain correctional institutions — and as far as we've heard, they're not available anywhere else. (Moon Lodge also sells a flavor called The Whole Shabang.)

The chips were wide rippled and had a lot of spicy barbecue seasoning on them, with the level of heat varying from one chip to the next. The "Hot, Hot, Hot! Barbeque" name fit fairly well, as they were really more of a hot barbecue chip than strictly a hot chip, though the heat level maybe didn't warrant repeating the word thrice. Our tasters liked these chips a lot. Not everyone felt a huge kick of heat when they crunched in, but the fire that was illustrated so well on the bag did catch up with some people in the aftertaste. The taste and texture reminded me a lot of the chips from Boyer's, though these had a more conventional level of seasoning powder than the overloaded Boyer's chips.

So the Moon Lodge chips present us with a tough choice: Abide by the law, or get a chance to enjoy these delicious chips on a regular basis.

Smell test: Good mix of potato and barbecue powder, with a hint of heat.

From the package: “A century and a half ago, a customer's complaint created a multi-billion dollar industry, and it happened at Moon Lake Lodge in Saratoga Springs, New York. Commodore Cornelius Vanderbilt, the famous railroad tycoon, was dining at the majestic Lodge. He sent back his French fries because they were cut too thick. The chef obliged, and cut them thinner. The Commodore sent them back again. The chef then sliced the potatoes as thin and fried them as crisp as he could. The Commodore loved them, and begged for more!” .... “Moon Lodge snacks are made with the same pride and commitment that made the original chips served at the lodge such a treat.”

This snack was discovered at a correctional institution. Review published May 2010.