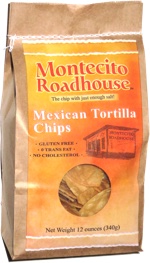 Taste test: The bag had something I've never seen before: It was sewn shut at the top. After some initial frustration/confusion with getting it open, I untwisted the thread at the end and it all came out easily when I pulled it. The thread didn't seem like much of a seal, but it turned out there was a clear plastic bag inside the paper bag. The plastic bag was fairly tough to pull open.

The chips had a nice beige color and quarter-circle shapes, with bumpy surfaces that included many bubbles. I crunched in to find that the taste and texture were much like the freshly fried chips that they give you at Mexican restaurants. Lots of crunch and a great corn taste, with a fairly low level of salt. Really good!

Many tortilla chip brands splash the words "Restaurant Style" across their bags, even though they're really not. This bag didn't use those words, but they definitely were. Excellent.

From the package: “The chip with just enough salt!” ... “May be produced with genetic engineering.” ... “Legend has it that the revolutionary Zapata and his troops were very hungry as they sat around a campfire one night. Their cook, Juan Moore, was heating corn oil. A peasant woman had given Juan some tortillas, so he dropped one into the oil, and “voila” (Juan was part French), the Juan Moore tortilla chip was born.”

This snack was discovered by Jeremy at Philbrick's Fresh Market, Hampton, New Hampshire. Review published May 2017.