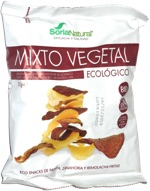 Taste test: This bag from Italy added two extra veggies to the usual potato chips, with carrots and beets bringing some color to the mix.

The potato chips had curvy shapes with some bubbles embedded inside and a golden yellow color. They were just great, with a crisp crunch, a low level of salt and a rich potato flavor.

Smell test: Very nice, the beets seemed to add some richness to the potato.

This snack was discovered by Judy and Lee in Barcelona, Spain. Review published .