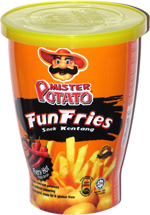 Taste test: These fries had fairly random shapes and were generally quite thick, but most of the pieces were on the short side. They had a fairly bright orange look, and there appeared to be a lot of seasoning on the surfaces.

We crunched in to find a soft crunch and pretty good taste, yet they fell quite a bit short of being Fiery Hot. There were some occasional kicks of heat, but for the most part, the flavor was way more tangy than actually hot. The taste was a bit better than the fairly bland original flavor, but they still had the same somewhat gritty feel as those. So overall, decent fries, but nothing great.

Smell test: Tangy mix of spices, kind of sharp but not really hot.

From the package: “Made from real potatoes” ... “No artificial colouring” ... “Cholesterol, trans fat & gluten free”

This snack was contributed to Taquitos.net by the manufacturer. Review published January 2015.