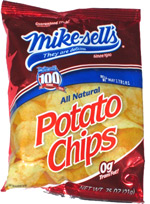 Taste test: These potato chips were cut fairly thin, had a pale yellow color and had bits of skin around their edges. They were about the least wiggly potato chips I've had in a long time.

I crunched in and found that they had kind of a weak potato flavor at first, as there seemed to be barely any salt, so the flavor just didn't stand out. The taste wasn't bad, but there just wasn't much of it when compared to most potato chips. When I ate several chips in a row, the potato flavor came through better, but a little more salt might have helped to deliver that flavor without having to eat so many chips.

From the package: “Since 1910 we've practiced the 'They are delicious!' standard D.W. Mikesell established when he first started delivering fresh-made potato chips.”

This snack was discovered at Snaxpo. Review published May 2011.