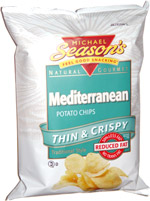 Taste test: These thinly cut potato chips were crisp and had a tasty mix of spices on them, with oregano and other seasonings visible on the surface.

The "Mediterranean" name for the flavor had our tasters scratching their heads, but once people tried the chips, most like the taste. Some thought that the taste was like the spices on a pizza (but without the cheese and tomato). This bag was fairly large, and it was positively loaded with chips.

Smell test: Nice mix of spices, sort of like a pizza.

From the package: “30% less fat” ... “Our premium potato chips are all-natural and deliciously different. They're thin & crisp like the chips you grew up with — but without the greasy feeling. We choose only select potatoes, cook them in healthy oils, then flavor them to tease your taste buds.”