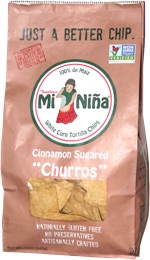 Taste test: These tortilla chips had the same shapes as the Jalapeño Agave and original flavors from Mi Niña, with 1/6-circle shapes, bubbly and bumpy surfaces. The only visible difference was a light seasoning on the surfaces made the chips just slightly darker.

I crunched in to find that on the first bite, the mid-strength cinnamon sugar taste reminded me a bit of churros, but nothing else really did — the solid crunch of the tortilla chip wasn't churro-like, and the use of corn rather than wheat as the base also made the full taste rather un-churro-like. Still, a nice change of tastes for a very different take on the tortilla chip.

From the package: “After years of enjoying fresh corn tortillas shipped by my mother-in-law from my wife's hometown in Mexico, I decided it was time to share real corn tortillas with the rest of New England.”