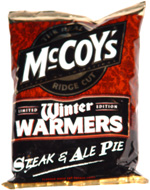 Taste test: These thick potato chips had sharp, medium-width ripples and were generally a brownish yellow in color, with a good helping of flavor powder visible.

There was a great crunch when I bit in, with a lot of great potato taste, along with some fairly mild seasoning. The thick cut of the chips meant that even though the chips were generally smallish, eating one chip meant a lot of potato in the mouth at a time. Though the taste was good, I was expecting a lot more from the flavor, as the seasoning didn't live up to the usual intensity level of McCoy's seasonings and didn't remind me of steak or and other particular filling for a Steak & Ale Pie. Still, as with all of the McCoy's chips, tasty.

Smell test: Mild, but sort of like grilled steak.