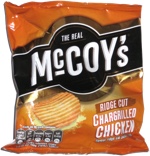 Taste test: These potato chips had the same thick cut and deep ridges as the other McCoy's flavors, with generally a golden yellow color, lots of seasoning visible in those ridges, and some skin on the edges.

I crunched in to find that the flavoring really did taste like chicken, with some mild seasonings added, by as for chargrilled, I couldn't really taste anything in the way of char. Pretty good, but not a flavor standout.

Smell test: Strong seasoned chicken snell, though not particularly a chargrilled one.

From the package: “Boldly satisfying” ... “Packaged in a protective atmosphere”

This snack was discovered by Amy and Mary Anna in London. Review published April 2016.