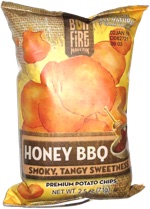 Taste test: These potato chips had generally flat shapes with a yellow color generally and areas that had an orange glow.

We crunched in to find a good strong crunch with good crispness and a nice sweet barbecue flavor that mixed well with the good potato taste. There wasn't any heat initially, but some mild heat did kick in for the aftertaste. Pretty good.

This snack was discovered by Jeremy at Maverik. Review published .