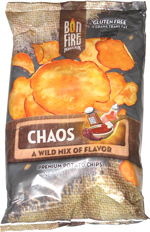 Taste test: When we spotted these potato chips at a previously unvisited convenience store chain, the word "Chaos" made the purchase an easy decision, and it got even easier as we read the bag's the description of the flavor.

The marketing copy described a combination of all of the flavors that Maverick makes (though the illustration on the front showed just vinegar, salt, barbecue sauce and a hot pepper). That sounded a lot like California Earthquake Chips and Funky Fusion from Dirty Chips.

We opened the bag to find that the chips were fairly thin and had a bright yellow, slightly orange color with some dark spots on the surfaces and small bubbles embedded inside. We were expecting a lot of flavoring, but when we crunched in, the taste was relatively mild. There were hints of barbecue sauce and vinegar, and it was all quite tasty, just not that bold. Sure, there was a picture of a hot pepper, but we could not taste anything like that. Still a very nice flavor that mixed well with the potato, just less of it then we expected

This snack was discovered by Jeremy at Maverik. Review published .