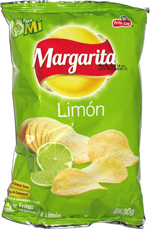 Taste test: This bag contained potato chips with a pale yellow color and some areas of darker skin around the edges, and we were impressed by the number of large, unbroken chips, especially for such a small bag. The chips boasted a lime flavor, but there was nothing green on the chips themselves.

We crunched in to find that the chips had a somewhat thick cut, with a very nice crispness and a fairly soft crunch. The lime was fairly intense on the first bite, and then a nice rich potato flavor kicked in after that. Really tasty, very good!