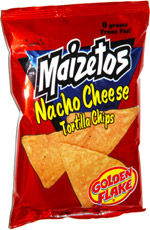 Taste test: These triangular tortilla chips were similar to Doritos, but the chips were generally flatter than Doritos, with very little or no curl in most of the chips.

They were cut a little thinner than Doritos, and the surface had a smoother texture. They tasted quite good, as there was a light crunch and a good crispness, with a nice strong hit of nacho cheese flavor. When I got this bag, I first thought that that these were the same line of chips as the Maizitos Chile & Limón that we previously reviewed from Barcel, but these are actually made by Golden Flake and spelled Maizetos, with an E instead of an I.

From the package: “0 Grams Trans Fat!”

This snack was discovered at Snaxpo. Review published June 2009.