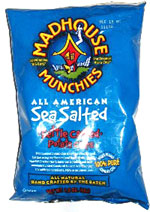 Taste test: These are very similar to Cape Cod chips, featuring a good potato flavor but a little light on the crunch.

Despite the salt reference in the name, our tasters thought the chips also were a bit light on sodium chloride. "They could use about eight times more sea salt," said one particularly pro-salt panelist. All in all, the chips aren't bad by any stretch of the imagination. But they lag behind some of Madhouse Munchies' other flavors.

From the package: “The Original Micro-Chip.” ... “Copied by the 'Big Guys.' ” ... “All Natural Hand Crafted By The Batch.” ... “only non-GMO select North American potatoes and high monounsaturated canola oil.” ... The back includes the seven-point “Madhouse Creed, an “Eat Madhouse!” admonition and four paragraphs of text that ends like this: “Call us crazy? Sure. Just don't call us your average potato chip company.”

This snack was discovered by Craig.