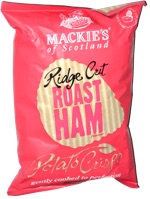 Taste test: These potato chips had very wide ripples and a light orange color, with the overall shapes of the chips fairly flat as rippled chips go.

We crunched in to find a good crunch and a very nice savory flavor, but the flavor didn't seem all that much like ham (nor any other pork product). The flavor was very tasty and enjoyable, even if it failed to deliver the ham. One of our snackers said that the flavor reminded her of fake bacon.

Smell test: Mostly like potato, a hint of some extra seasoning but not really ham or meat-like.

From the package: “Try a new flavour! If you love the full on flavour and colossal crunch of these roast ham ridge cut crisps, you might also enjoy our other ridge cut varieties including caramelised red onion, prawn cocktail & more!”