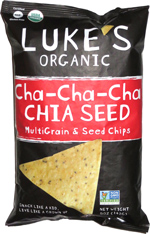 Taste test: Every time I've reviewed a snack that includes chia seeds, I've made some jokes about chia pets, so it was great to find this one, where it seems the folks selling the chips made the same joke themselves right on the bag. This one also afforded me the opportunity to make some Star Wars references.

I opened the bag to find no chia pets inside, but instead, triangular chips, slightly smaller than Doritos, with a nice yellow color, plus an even distribution of black seeds throughout.

I crunched in to find a light crunch and good crispness, with generally a mild salted tortilla chips taste. The level of salt seemed to vary from chip to chip, with the saltier ones much tastier than the ones with less salt.

Smell test: Strong corn tortilla smell, but some seeds in there too.

From the package: “I was diagnosed with Celiac disease when I was 7 years old and I've been on the lookout for good-tasting gluten-free snacks ever since. Finally, here's one that doesn't taste like tree bark. You'll be so happy, you'll eat the whole bag.” ... “Ingredients: Luke's Organic Grain & Seeds Blend (Corn, Brown Rice, Millet, Quinoa, Amaranth), Luke's Organic Oil Blend (Sunflower Oil, Safflower Oil and/or Red Palm Olein), Organic Chia Seeds, Sea Salt”

This snack was discovered by Jeremy at Target. Review published March 2015.