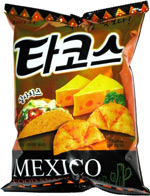 Taste test: These wheat-based chips from Korea were shaped kind of like tacos, with a semicircular shape that included three perforations to break them into smaller pieces (similar to the full-circle TGI Friday's Pizza Chips).

But cutting it up that way would seem more like something that you would do with a quesadilla than a taco. Anyway, most of our snackers liked the taste, though some weren't so sure, but people weren't generally convinced that the chips tasted like tacos.