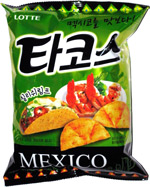 The chips had a golden beige color, not quite a bright as the ones pictured on the bag, with some bits of green embedded inside. Among our tasters, offering anything involving shrimp can be a big risk, but the people who tried these actually liked them. The mild but tangy mix of seasonings did kind of taste like a shrimp taco. I dipped some of then into sour cream a liked it a lot.

Smell test: Yeah, it does smell like shrimp. But not in a bad way.