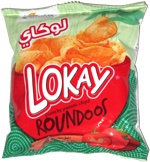 Taste test: These chips had shell-like shapes that appeared to result from round potato crisps curling up a bit during cooking. There was a light beige color generally, with a light smattering of fine orange and black seasoning powder.

I crunched in to find a loud crunch and a slightly foam-like feel hat was still pretty good, but less crisp than Pringles-style crisps. There was an initial flavor that was like a sweet tomato, but the promised chili peppers kicked in soon after for a mild kick of heat that had a high degree of tanginess. Very tasty.

Smell test: Tomatoey, with a bit of a chili pepper kick.