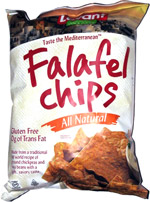 Taste test: These chips looked kind of like Cool Ranch Doritos in terms of their coloration, but they were generally larger and curved on one of the three sides.

They had a mild crunch and a tasty mix of spices, with a taste that didn't seem quite falafel-like at first, but became increasingly falafel-like as out tasters ate more. People liked these chips a lot and went back to the bag for extra handfuls.

Smell test: Very mild, but after a few whiffs, falafel-like.

From the package: “Made from a traditional old world recipe of ground chickpeas and lava beans with a light, savory taste.” ... “Taste the Mediterranean™”