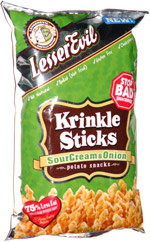 Taste test: These snacks were shaped kind of like small krinkle-cut fries.

They reminded me a lot of Pogos since they had just about the same shape, but thankfully the Krinkle Sticks lacked the Pogos' sticky glaze. But the taste was fairly average, not bad but nothing special. They had a gritty feel and a bland potato-like taste, along with a bit of sour cream and onion seasoning. Everyone who tried these seemed to tolerate or like them, but nobody was very excited about them. According to the bag, LesserEvil wanted these to be as tasty as potato chips but with less fat. These were definitely less tasty than your average potato chips.

Smell test: Not much, maybe a slight onion smell.

From the package: “Stop bad snacking!” ... “Potato Chip Snackcident Prevention™” ... “As people who love making delicious, better-for-you snacks, we know that our next culinary challenge would be the Mt. Everest of all snacks: the Mighty Potato Chip. Who doesn't love the taste of a good tater chip? Unfortunately with 10+ grams of fat, there a very greasy price to pay. And while there are some healthier options available, they all seem to be plagued with the dreaded 'cardboard-taste' syndrome. So we set out to on a mission to create a crunchy potato snacks that could be enjoyed as a meal or on its own, tasted great and was made from real potatoes, gourmet spices and nothing artificial.” 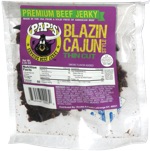