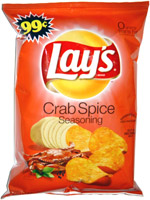 Taste test: When I first spotted this bag, I nearly fell out of my chair.

That is, if I had been sitting in a chair rather than walking through the snack aisle of Walgreen's, I would have fallen out of it. The point being, I was surprised to see Lay's selling this flavor. I'm assuming from the "Crab Spice Seasoning" that they were aiming for a similar Old Bay Seasoning flavor to the Utz Crab Chip or Herr's Old Bay chips. The bag contained a number of large, unbroken potato chips with a light coating of a dark orange seasoning. The taste was pretty good, though the intensity of the spices was lower than the Utz and Herr's versions. Still, these were fairly tangy and left behind a strong aftertaste.

This snack was discovered by Jeremy at Walgreens. Review published September 2007.