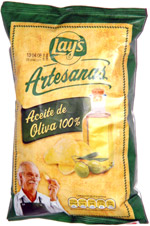 Taste test: These potato chips from Spain were generally similar to many kinds of kettle-cooked chips, but they differed in several notable ways. Most of the chips in this bag lacked the typical wiggly shape, as these were generally flat, and in many cases, narrow and long. Many of the chips had bubbles embedded in them.

There was something about the texture of these chips that really stood out, as the crunch was bit softer than, for example, Cape Cod chips, but the crispness level far exceeded Cape Cod, and that high crispness combined with the crunch really worked well. The potato taste was pretty good, a bit different than the usual taste, probably because of the olive oil, but nothing extraordinary in terms of taste. Still, the kettle-style texture, unusual crispness and good potato flavor combined to make these chips a standout.

This snack was discovered by Judy and Lee in London. Review published April 2008. 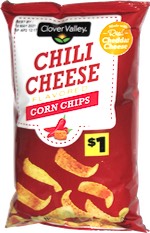