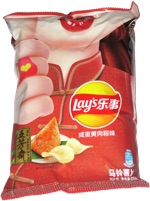 Taste test: These potato chips promised to duplicate the taste of an egg-based meat dumpling from a restaurant chain called Wu Fang Zhai, so all in all, I had no idea what that would taste like. The chips had curvy shapes and a light yellow color, with any seasoning basically camouflaged by the chip surface, so they looked much like regular Lay's.

I crunched in to find a light crunch and a fairly mild flavor, with a egg yolk being a good description of it. Not having eating the intended dumpling, I can't make a direct comparison, but it sure didn't remind me of any kind of dumpling or meat. But pretty good as an egg flavor goes.

Smell test: Kind of egg-like, along with salted potato. Good.