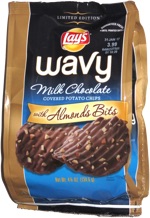 Taste test: These rippled potato chips had a less-than-complete coating of a light-colored milk chocolate, so there was lots of light yellow chip surface visible in between the coated parts. They promised almond bits as well, a change from the original chocolate-coated Wavy Lay's, and there were a fair number of smallish almond fragments stuck to the chocolate (but not quite the density of almonds pictured on the bag). 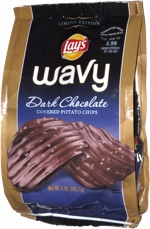 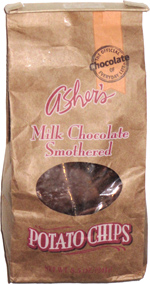 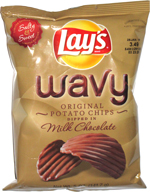 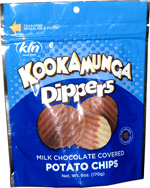 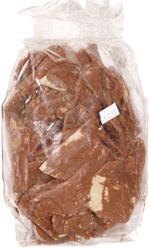 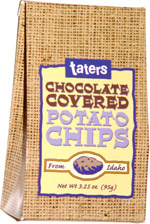 I grabbed my first chip to find a somewhat melty feel to the chocolate on my fingertips, then crunched in to find lots and lots of milk chocolate to taste, along with a light crunch from the potato chips inside. I could see the almonds, but they didn't have much effect on the taste.

One big change from the original coated Lay's that we reviewed three years ago to the ones they're selling now was a switch from a conventionally shaped potato chip bag to more of a stand-up style of bag.

This snack was discovered at Target. Review published .