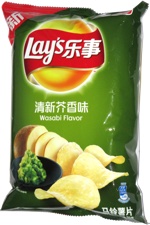 Taste test: These potato chips from China promised one the most shocking Lay's flavors ever, but when I opened the bag, they looked like ordinary potato chips, with just the same range of light yellow colors that you'd expect from Lay's Classic.

I crunched in to find that looks can be deceiving! There was an immediate wasabi flavor, mixing well with the potato for a nice taste. As for the level of wasabi zing, it was quite minimal, about as light of a kick as there could be while still being noticeable, roughly comparable to the American Wasabi Ginger Lay's. Even the smallest bit of actual wasabi would give more of that special wasabi sensation than one of these chips, so check out our many other wasabi snack reviews if you're looking for something stronger, but still, these chips were very tasty.