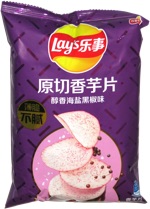 Taste test: The Lay's brand is pretty much synonymous with potato chips (except for that one time we found Lay's Yam Chips), but now they're using it for chips made from at least one other root vegetable, taro (which we would most closely associate with Terra Chips).

The chips looked much like other taro chips, with light beige surfaces marked up by what looks like smudges of ink. The smudges were dark purple in color, not the bright reddish purple shown on the bag, and the bright areas shown around the edges were nowhere to be seen.

I crunched in to find a light, brittle crunch, crisper on some of the chips than others, with some of the stiffness that's typical of taro chips. The taste that wasn't quite consistent with the named flavor, nor with the peppercorns pictured on the bag. It was good, kind of mildly garlicy and salty, just not peppery as expected. Very tasty.

Now we're wondering which vegetable Lay's will be using next.

Smell test: Not at all the usual black pepper smell. Maybe the slightest hint of that mixed in with garlic and other spices.