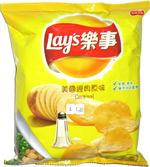 Taste test: This Taiwanese version of Lay's Potato Chips looked pretty much like the American version we're accustomed to, featuring a pale yellow color with some more golden areas, a thin cut, just a few bits of skin around the edges, and no visible seasoning powder.

We crunched in and were surprised by how much flavor there was, as the taste was not the same as the standard American Lay's. We we checked the ingredients and discovered that it definitely wasn't the same recipe (which would involve just potatoes, oil and salt) but rather there were several additional flavorings, including sugar and garlic powder. This was particularly surprising, not just because we couldn't really see any of it on the chips, but because the bag was labeled as "original" flavor. There wasn't so much of those flavors that you could specifically taste them much, but there was still enough to alter the taste of the potato. Anyway, the chips were crisp, and the taste was good.

This snack was discovered by Jeremy at Thai Kee IGA Supermarket, at Market City (above Paddy's Market) in Sydney, Australia. Review published .