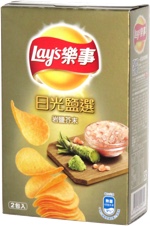 Taste test: This version of Lay's Stax from Taiwan not only offered up the bold flavor of wasabi, but it did so in a package very different from what we're accustomed to from Stax. The thin cardboard box contained two somewhat rigid foil bags, each holding one stack of Stax, with just the crisps in the bag and no tray to protect them, but it work pretty well to keep the pieces unbroken.

The Stax themselves were a bit smaller than regular in-a-blue-can variety, but they had the same basic uniform shape, just scaled down. There was no sign of the green that we associate with wasabi, as they looked like just plain Stax. We crunched in to find a nice mix of potato flavor and wasabi zing, a fairly strong kick. A good one for wasabi fans.

Smell test: Not really much.