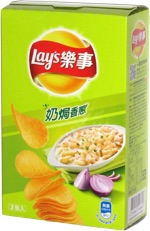 Taste test: This version of Lay's Stax from Taiwan was a bit confounding when we first looked at the box, as the language was foreign to us and the pictures had us making some wild guesses about the flavor. It looked like some onions next to a bowl of macaroni and cheese. That would have been an interesting one. (But it would not be a flavor first by a long shot: we've reviewed Wise Cheez Doodles Mac -n- Cheese, Lay's Cheddar Bacon Mac & Cheese and Kraft Macaroni & Cheese Crackers.) But alas, it was not to be. We eventually found an import label that identified the flavor as sour cream and onion.

But it was a very different product than the Sour Cream & Onion Stax that we reviewed in 2003. This one was a cardboard box (rather than a blue plastic tube), containing two separate stacks of smaller crisps of the same shape, each foil-wrapped. The chips had a smattering of large green bits on the surface, plus some fine light yellow/orange seasoning that closely matched the color of the chips. There was a light crunch and a fairly midl flavor, more onion than sour cream. Pretty good.