Taste test: This flavor of Lay's Stax had the usual shapes, with a light coating of bright orange seasoning (but less if it than shown in the picture on the can) plus some black spots (about the same as shown on the can).

We crunched in to find mostly a sour cream and cheddar flavor, without much in the way of bacon to taste. Not the strongest flavor in the world, but still reasonably tasty. These were pretty popular, as many of our snackers crunched their way through multiple handfuls of crisps while enjoying some beer.

Smell test: Not that different from most Stax, but maybe a hint of bacon.

From the package: “Lay's Stax® Potato Crisps are the ultimate way to recharge! Lay's Stax® Bacon & Cheddar Potato Skin flavored crisps give you the full flavor and crisp crunch that adds great taste to your busy day. Enjoy Lay's Stax® Crisps at the office, around the house, or wherever you are!” 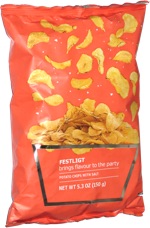