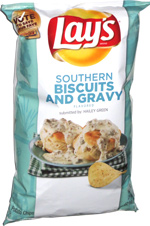 Taste test: When Lay's chooses flavors for their Do Us A Flavor contests, they tend to have some shock value, and they're usually flavors that haven't been tried previously on a potato chip. For example: Cappuccino. Those things were mostly the case for the four flavors this time around as well, with the other three being Greektown Gyro, West Coast Truffle Fries and New York Reuben. To most snackers we talked to, this kind seemed as oddball as the others, but if you follow our reviews closely, you noticed that they actually missed the originality factor on this one. Larry the Cable Guy is known for his stand-up comedy and acting in some Pixar films, but he also lends his name to a line of potato chips, including a Biscuits & Gravy flavor introduced a year ago.

A look inside the bag revealed some wiggly-looking chips (I thought at first that they might be kettle cooked like Greektown Gyro, but they were a bit less wiggly than those) with many bubbles embedded inside, a strong yellow color and a light coating of generally black bits of seasoning.

There was a good light, crisp crunch and a nice taste that reminded me a lot of Larry's version, with a creamy flavor that included some mild spices, including a hint of black pepper. The flavor was quite good and was delivered with appropriate intensity (something that Truffle Fries missed by a bit and New York Reuben missed by a mile), making them the best of the four Do Us A Flavor varieties. Not a huge standout in the wide world of potato chips, but good enough to win my vote in this contest, with a slight edge over Truffle Fries.

Smell test: Kind of a like a black peppery gravy.

From the package: “submitted by: Hailey Green” ... “My Grandma (Nonnie) and Grandpa are from Tennessee, and Nonnie is a walking cookbook full of southern staples. My absolute favorite dish that she makes is her homemade biscuits and gravy!”

This snack was discovered by Jeremy at Market Basket. Review published July 2015.