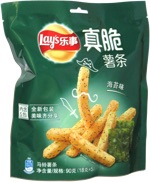 Taste test: This bag of fries was unusual in several ways, starting with the fact that they were fries at all under the Lay's brand. Next, it turned out that the bag contained five smaller bags (with similar designs to the main one), which is unusual for both fry-shapes shapes and the Lay's brand.

We opened the first mini-bag to find that the fries had shapes similar to other cut-from-the-potato fries like Frito-Lay's own Ruffles Crispy Fries, though smaller, with just as high of a density of dark green seasoning bits as were pictured on the bag. When we shared these around with some snackers enjoying beer after a run, they were not impressed, as people were nearly unanimous in finding the taste to be not pleasurable.

This snack was discovered at Super 88, Malden. Review published . 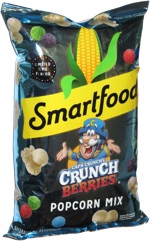