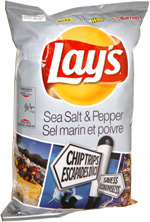 Taste test: These salt and pepper potato chips reminded me a lot of the Utz salt & pepper chips as they had a very similar taste, bringing out not just the crushed black pepper taste, but also a hint of vinegar and a mix of other spices.

They were thin cut and very crisp, probably crisper than the Utz version, for a very nice feel and taste. Our tasters were impressed from the moment they crunched in, so people grabbed these by the handful.

From the package: “Sel marin et poivre” ... “Chip trips/escapades d'ici” ... “Save$$/Économisez$$” ... “At Lay's, we believe in simple happiness. It's a journey we've been on for years. Like in 2005, when we introduced trans fat free oils, because it was the right thing to do. Or in 2009, when we reduced sodium in all our Lay's flavours — by at least 25% per 50 g serving. All this and the same light, crispy, irresistibly fresh taste you expect from Lay's. Happiness is simple.”

This snack was discovered by Jeremy at Wal-Mart. Review published August 2010.