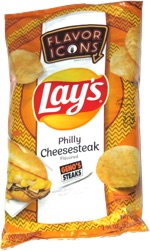 Taste test: This member of the Flavor Icons line from Lay's went for the flavor of Philadelphia's favorite sandwich, available at many spots throughout the City of Brotherly Love, but the recipe was supposed to be based specifically on Geno's Steaks in South Philly. (During four years living in Philadelphia, I ate a good number of cheesesteaks from several different restaurants — the majority from Abner's at 38th and Chestnut — but never actually ate one from Geno's, nor from their famous neighbor Pat's.)

The chips had golden yellowish surfaces with some scattered black bits. I crunched in to find a very soft crunch and a taste that was dominated by the grilled onions, but those sweet onions mixed well with some cheese and a mild beef broth type of taste. If the chips had come from an unlabeled bag, I doubt that I could have identified the flavor as cheesesteak, but it was reasonable to call it that. The taste was pretty good, especially if you like to have lots of grilled onions on your cheesesteak.

Smell test: Nice. Can smell the cheese, maybe a bit of onion, with maybe a meat broth thing going too, so at least in the same league as a cheesesteak.