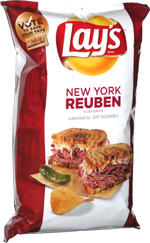 Taste test: This limited-time flavor was released along with Greektown Gyro, West Coast Truffle Fries and Southern Biscuits and Gravy as part of the 2015 edition of Lay's Do Us A Flavor promotion.

The annual flavor rollout invites snackers to buy and eat all four, then go on the Interweb to vote for which one should remain a permanent flavor. Between the time of the flavor finalists announcement and the actual arrival of the chips, this was the one that several people told me that they feared would be awful.

I opened the bag to find that the chips had fairly wiggly shapes with many bubbles embedded inside. There was a medium yellow color with some orange glow and a very slight amount of generally reddish seasoning. After being very favorably impressed when I took a whiff of the bag (see "Aroma"), the taste was quite disappointing. The Lay's folks figured out just how to make the chips smell like a Reuben, but they didn't follow though with a spot-on taste. The crispness of the chips was very good, but the flavor was just weak, really barely there. Whatever it was might have been a tiny little bit like corned beef with sauerkraut, but there was so little of it that they tasted nearly like plain potato chips.

The fears of something bad were not realized, as there was nothing offensive or awful about the flavor, but it was just far too slight to make me think that I'm eating a Reuben sandwich. Not very convincing.

Smell test: Really does smell like a Reuben — like corned beer and sauerkraut. Even a hint of pickle!

From the package: “submitted by: Jeff Solensky” ... “I work in a restaurant where Reuben sandwiches are a big seller. It reminds me of my upbringing on Long Island, where Delis are very prominent.”

This snack was discovered by Jeremy at Market Basket. Review published July 2015.