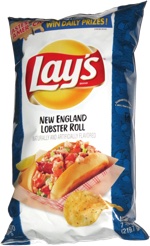 Taste test: In name at least, this flavor was probably the most shocking to see on a potato chip out of the eight regional flavors in the Lay's Tastes of America promotion — and they just happened to send this one to my region. It promised the taste of a buttered lobster roll, but a pre-eating reading of the ingredients revealed no actual lobster inside.

Time to eat! The chips had curvy shapes with strong yellow surfaces bearing a heavy smattering of large seasoning bits, most of them greenish and some reddish. I crunched in to find a soft crunch and a tasty mix of seasonings that didn't exactly scream "Lobster!" to me but did deliver maybe a hit of it beneath a main flavor that was creamy, buttery and oniony.

If you've never had a lobster roll, I don't think this would do much of a job of introducing you to the experience, and if you've had lots of them and crave another, I doubt this would be much of a substitute. So I don't see a real point to these chips, other than shock value. But they were good chips.

From the package: “Inspired by the lobster shacks of the Northeast, here's a taste of fresh lobster served on a buttery grilled roll. It's wicked good!” ... “Bring home the flavor for a chance to win the daily prizes!”