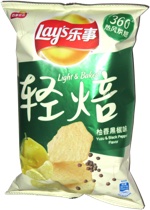 Taste test: This snack from China had roughly hexagonal shapes that were generally flat, much like the American versions of Baked Lay's, with a light smattering of dark seasoning bits on the surfaces.

We crunched in to find very little in the way of black pepper, as the little pepper that was there seemed quite different, as it was almost like a hint of sichuan pepper, but orders of magnitude below the strength of some of the shocking sichuan pepper snacks we've tried. We're no experts on the taste of the yuzu fruit (we've reviewed one yuzu potato chip and one yuzu fry) but maybe it was the yuzu that brought out the unusual pepper taste. Regardless, this was a nice taste, certainly different from any of the other Baked Lay's.

Smell test: Not really peppery like most black pepper snacks, but definitely something sharp and interesting.