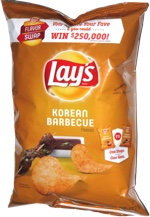 Taste test: This flavor was released as part of the Lay's Flavor Swap promotion, which paired up four sets of two flavors, one an existing product and one a new one, for a head-to-head online competition to (supposedly) determine which one stays and which one goes. Korean Barbecue was the new one matched up against Honey Barbecue.

The potato chips in this bag had a light coating of sort of brownish seasoning, giving them a bit of a golden russet-like appearance. There were smallish bubbles on the surfaces of the chips, with some small darker seasoning bits here and there. I bit in to find a good crispness and nice flavor, but it was a tough one to classify — it wasn't particularly spicy, tangy, hot or sweet. But it did taste pretty good. Noting special about it, but solidly good.

Given the follow-up actions to past Frito-Lay flavor contests, in which losers have later reappeared and winners didn't always become permanent, plus the fact that Honey Barbecue isn't a consistently available flavor, I'm rather skeptical that it's a binding vote.

Smell test: Definitely something there, but really mild. Kind of like a mildly fruity barbecue sauce.

This snack was discovered by Jeremy at Speedway. Review published .