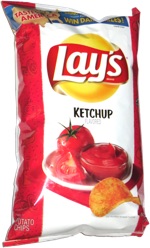 Taste test: This flavor, part of the Lay's Tastes of America series, was hardly the first time that we've seen the Lay's brand on a bag of ketchup flavored snacks, as their Ketchup Potato Chips in Canada have been around forever, and they've also used the Lay's brand for these ketchup-flavored potato sticks in Poland. We even found one variation in the USA before, as six years ago we reviewed Spicy Ketchup potato chips.

The chips generally had a yellow color with some orange sections, but the amount of red seasoning was far lower than we saw on those Canadian ones. We crunched in to find a soft, light crunch and a mild ketchup flavor that was just slightly tangy. It tasted good and went well with the potato, but it was on the weak side as ketchup-flavored potato chips go, a whole order of magnitude lower in ketchup intensity than the popular Canadian version.

From the package: “Inspired by the flavor that makes everything better, it's no surprise that ketchup is found everywhere from backyards to ballparks!”