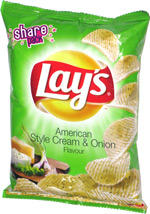 Taste test: These narrow-rippled chips were an irresistible buy for me, as the whole idea of how they came to be sold where they were was just too crazy to resist.

I think the sequence of events was that the Indian arm of Pepsi/Frito-Lay created a product that duplicated the taste of the American version of Lay's Sour Cream & Onion to sell in India, where such a flavor is apparently a novelty. Then things took a strange turn as someone imported it to the USA to sell at Indian grocery stores, including two where we spotted these — the same USA where practically every store sells the chips that these were based on in the first place. For other Indian Lay's flavors like Magic Masala and Lime 'n' Masala Masti, importing made sense, but this flavor was a whole different deal. Weird, huh?

Anyway, the chips weren't actually the same, as unlike the flat American Lay's, some of the international versions are narrow-rippled (and yet not labeled as Ruffles). But they were good, with a good crispness, minor crunch and very nice, fairly mild sour cream and onion flavor.

Smell test: Not much at all. Just the slightest sour cream and onion smell.

From the package: “Indulge in Lay's® American Style Cream & Onion Flavour 'n' watch the world slow down around you. Be DilLogical®”