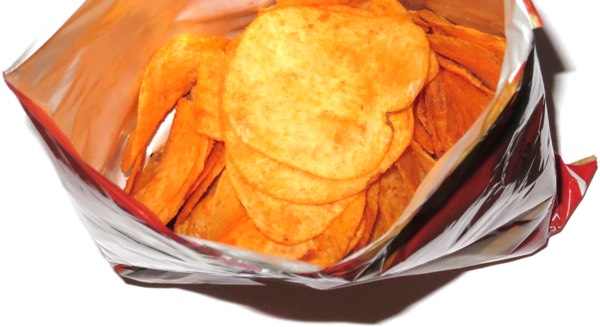 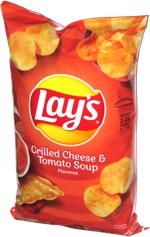 Taste test: This flavor was formerly a "Do Us A Flavor" limited edition for Canada, but now it has arrived in the USA, with no indication on the bag of being limited. (Also in Canada, Humpty Dumpty has done a Grilled Cheese & Ketchup flavor.)

The chips generally had gently curving shapes, with some folded-over ones. The surface had an orange glow, with some areas more yellow. There were two chips near the top of the bag that were positively huge!

I crunched in to find a nice crisp feel and a taste that mixed some cheesiness with a strong hint of tomato soup. The taste was generally milder in both the cheese and tomato departments than it should have been to warrant being associated with this this soup-and-sandwich combo. Thankfully, some pieces appeared to have more seasoning than others, and those ended up being the best of the bag, with a noticeably stronger tomato taste. Regardless of how well it matched the name, a nice flavor.

Smell test: Smells like a mild version of BBQ chips. A hint of tomato in there, but I'm not getting the cheese.

This snack was discovered at Shaw's at Boston University. Review published October 2019.