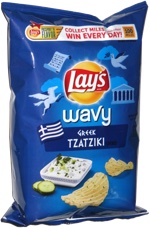 Taste test: This Lay's flavor was released along with Tikka Masala, Brazilian Picanha and Szechuan Chicken for the Passport to Flavor promotion. The potato chips had wide ripples and lots of specks of green on them, so they looked a whole lot like sour cream & onion chips (though Lay's does not ripple their version).

We crunched in to find a creamy flavor with a nice mix of spices, a good match for a greek Tzatziki sauce. Still, even the taste was pretty close to sour cream and onion for some people. We shared their chips with several snackers, and people were split between saying it tasted like Tzatziki and not noticing much of a different from sour cream & onion. Pretty good chips.

From the package: “When the Greeks mixed dill, garlic, and other unique spices to yogurt, Tzatziki became a Mediterranean classic! There;'s no doubt this creamy flavor with have you saying 'Opa!' ” ... “Partially Produced with Genetic Engineering”

This snack was discovered by Jeremy at Walgreens. Review published August 2016.