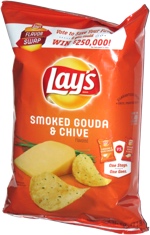 Taste test: These potato chips were part of a Lay's "Flavor Swap" promotion that matched them up against Cheddar & Sour Cream in a battle for survival on the snack shelf. 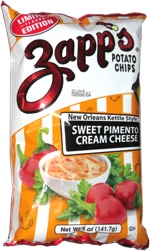 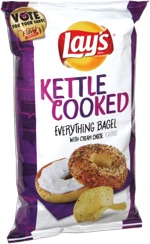 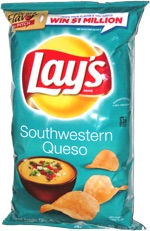 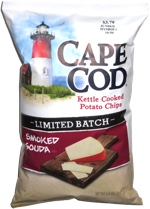 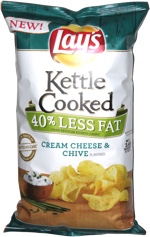 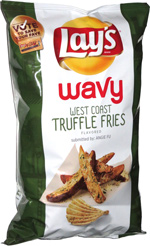 The chips had curvy shapes and a pale yellow color, with some bubbles embedded inside and a smattering of green bits on the surfaces. The chips had a paler color than shown in the picture on the bag, and the green things were smaller than shown. There were lots of unbroken chips, some quite large, in the medium-size bag.

I crunched in to my first chip to find a very tasty little explosion of flavor, as the mix of gouda and chives was quite delicious. As I ate more chips, that initially great flavor seemed much more ordinary, like a dulled-down Sour Cream & Onion. I also noticed that the texture wasn't so impressive, as the chips didn't have a particularly crisp feel. I wouldn't say that they were stale, but Lay's chips typically have a very nice light snap to them, and these chips didn't have that crispness. They first bite seemed very promising, but ultimately these chips disappointed.

From the package: “Cheddar & Sour Cream vs. Smoked Gouda & Chive. One Stays. One Goes.”

This snack was discovered at Speedway. Review published .