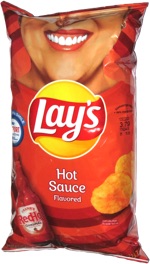 Taste test: These potato chips had an intense orange glow over most of their surfaces, plus some occasional tiny darker bits, with curvy shapes and some bubbles embedded inside.

I crunched in to find a great crisp feel and an immediate, strong kick of heat (much like the Flamin' Hot flavor). There were hints of the good Frank's Red Hot flavor at times, but mostly it was just the heat that was noticeable. And the heat lingered for a very long time in the aftertaste.

Regarding the bag, this was the first Lay's bag with the bottom-half-of-someone's-face look that we've reviewed. They've been using this design on and off for a few years as part of a promotion with Operation Smile. I don't have an opinion about Operation Smile one way or the other, but I do know that I have always found these bags to be creepy. It's somewhat creepy looking at the bottom of someone's face on the one bag, and it's super creepy when a whole bunch of faces are lined up along a shelf in the chip aisle. (The back of the bag does show a smaller version of the entire face.)

Smell test: The mix of potato and hot sauce is only slightly hot, but it's good.

From the package: “Frank's RedHot® and associated marks are logos are registered trademarks of McCormick & Company, Incorporated, licensed to Frito-Lay, Inc.”