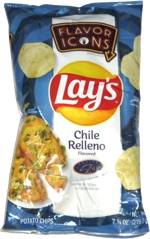 Taste test: This flavor joins Carnitas Street Taco, New York Pizza, Philly Cheesesteak and Nashville Hot Chicken in the Flavor Icons line, promising to deliver Cocina Azul of Albuquerque's version of the Mexican dish. (I've eaten Chile Relleno and even been to Albuquerque, but not to that restaurant.)

The chips had curvy shapes with lots of bubbles and some folded-over pieces, with a strong yellow color plus some large green bits scattered over the surfaces. I crunched in to find a crisp feel and a very unexpected flavor — the closest common flavor would be sour cream and onion. It seemed like buttermilk rather than sour cream, and the onion was less zesty than the stuff in Lay's Sour Cream & Onion, but it was still a good taste. As for the expected chili peppers and tasty cheeses, I have no idea what they were thinking in formulating it the way that they did.

From the package: “Inspired by the dish from Cocina Azul is creating buzz all over Albuquerque, here's a taste of their Chile Relleno.”

This snack was contributed to Taquitos.net by the manufacturer. Review published July 2020.