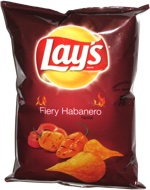 Taste test: These potato chips had generally flat shapes, including some folded-over chips, with bubbles and embedded inside. The surfaces had a smattering of bright orange seasoning, plus some darker seasoning bits. After enjoying the fiery habanero flavor of Doritos, we were hoping that the same level of heat and flavor would be delivered in this Lay’s version. The flames depicted on the bag had us optimistic.

We crunched in to find a light, soft crunch and some sort of tangy flavor at first, but certainly not a habanero fire level. I did notice some habanero flavor in the aftertaste, along with a growing heat, but still not the kind of heat that you would expect from habanero. Comparatively mild.

Smell test: A potato smell with some sort of spices, but not specifically habanero.

From the package: “Happiness in Every Bite.®”